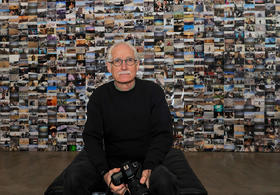 Jim Lommasson engages in long-term photographic projects that demonstrate human resilience in the face of profound and acute challenges. These projects—documenting the experiences of boxers, former soldiers, refugees—report out to the public in exhibitions and publications

Lommasson’s most recent solo exhibition at Blue Sky, What We Carried: Fragments from the Cradle of Civilization, was comprised of photos of the possessions that refugees fleeing the Iraq War were able to bring with them to the United States. Lommasson invited the owners to write about the objects in the negative space on the photo surrounding the object's image. Lommasson has completed What We Carried in Boston and Portland, working with local communities to exhibit the collaborative photographs and host educational outreach events. This year he travels to Chicago and the Detroit area for a further iteration of the project and an exhibition at the Arab American National Museum in Dearborn, Michigan.

Lommasson has been making and showing work consistently since the mid-70s. His work is in collections of the Portland Art Museum, the New Orleans Museum of Art, the San Francisco Museum of Modern Art and Yale University. Lommasson received the Dorothea Lange–Paul Taylor Prize from the Center for Documentary Studies at Duke University in 2005 for his first book, Shadow Boxers: Sweat, Sacrifice and The Will to Survive in American Boxing Gyms. This work examined the communities of boxers surrounding American neighborhood boxing gyms and their impact on the lives of individual boxers. In 2009 Oregon State University Press published Oaks Park Pentimento: Portland’s Lost and Found Carousel Art. His most recent book, Exit Wounds: Soldiers’ Stories–Life After Iraq and Afghanistan, was published this year.