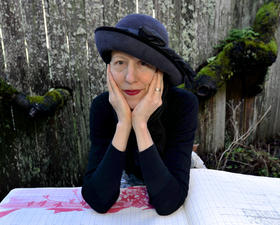 Born in Japan and raised in the Midwest, Julie Green knew by age four that she wanted to be an artist. From her childhood, Green recalls, “Growing up, there was no distinction between the family quilts and ukiyo-e prints in our home. An Iowa neighbor’s front yard showcased larger-than-life famous figures and a 20 foot American flag, all made out of ears of colored corn.” Her art is deeply integrated into her life and vice versa. She says, “Education, cooking, gardening, service, and handwork were, and are, a part of each day. Appreciation for homemade and handmade led me to paint blue food.” Her husband, artist Clay Lohmann, she says, is instrumental to her studio practice.

Themes of repetition, the personal or familiar and the domestic recur. Recently, for her exhibition My New Blue Friends at Upfor in Portland, Green papered the walls of the gallery with 200 sheets of mulberry paper on which she’d painted seashell forms in sumi ink. The primary works in the show, her New Blue Friends, are small works, each consisting of repeated variations on a form rendered in airbrushed egg tempera. Green says, “A word in the Japanese language, kehai, describes the feeling that something has just happened or is about to: a footstep, a whiff, a stirring. I attempt to make a lasting image out of kehai.”

Green is often best known for her 15-year project, The Last Supper,, which depicts the meal requests of U.S. death row inmates painted in cobalt blue mineral paint on second-hand plates. Green intends to add fifty plates a year until capital punishment is abolished. She began the series while teaching in Oklahoma, a state in which you could read last meal requests, as she says, “in the morning paper.” She spends half of each year on the project.

Green has been showing widely since the 80s. She has received awards including the Joan Mitchell Foundation Painters and Sculptors Grant and was nominated for the Contemporary Northwest Art Award. She received her MFA from the University of Kansas. Julie Green is a professor of art at Oregon State University, and is represented by Upfor. Her work will be included in Portland2016: A Biennial of Contemporary Art, produced by Disjecta and curated by Michelle Grabner.