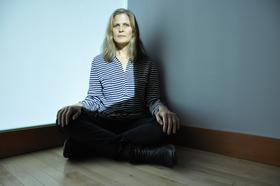 “It’s like a crime scene,” explains Katherine Longstreth. “Most of us don’t witness the crime, but the detectives go back and use evidence to determine what happened.”

Longstreth, a modern dancer and choreographer, uses the crime scene as a metaphor for her latest project, “Marginal Evidence,” which will be unlike anything she has done previously. No dance performance will take place; instead, “Marginal Evidence” will be a fall 2015 art installation on the subject of dance. It will occupy the White Box, a visual arts laboratory/gallery that is part of the University of Oregon campus in downtown Portland.

“Marginal Evidence” will be divided into three rooms inviting the visitor to engage with the work in a variety of ways. The first room will house archival evidence and ephemera associated with the making of “Slipknot,” a solo dance that Longstreth created 20 years ago. Displaying pages from choreography journals, dance clothing and other “data,” the walls will become a visual timeline of the artistic process.

In the next room, the Gray Box, multiple video segments of Longstreth rehearsing “Slipknot” will be projected on the walls. The sequence propels viewers to move their bodies to follow the narrative.

The final room will contain several interactive elements including the set design for a dance. By installing a wide range of materials -- visual, aural, experiential and analytic—she aims to connect with an equally wide audience.
“I anticipate visitors asking themselves what happened here?” says Longstreth. “How did this dance get made?” Though she is focusing her lens on the act of making dance, she hopes visitors see the connections to other artistic processes and that the material piques visitor’s curiosity about not only how artists make work, but why.

Longstreth grew up in New York City and began dancing at the 92nd Y. She received her bachelor’s degree in literary studies from Middlebury College and her master’s in performance and choreography from Arizona State University. Her dances have been presented in New York City by the Brooklyn Arts Exchange, Dance Theater Workshop, David Parker and the Bang Group, the 92nd Street Y, Performance Mix and Dixon Place, and in San Francisco by CounterPulse.

Seven years ago she moved with her husband and three kids to Portland where she continues to perform and make work and has been presented by Conduit and Studio 2 and featured in Ten Tiny Dances at PICA’s TBA Festival, Hand2Mouth’s Risk Reward Festival and The One Festival at the Headwaters Theater.

“Marginal Evidence” is definitely new territory for Longstreth, “I’ve never seen this type of exhibit,” she notes. “That makes me excited and nervous, but that is a good place to be for an artist."