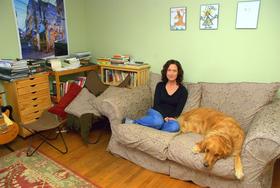 Poet, writer, musician and teacher Kirsten Rian was, by her own admission, a shy kid growing up in Portland who “interpreted and reinterpreted my world through writing poems and writing stories, writing songs, singing and playing piano.”

Despite a long career and success as an artist—authoring three books, publishing widely in journals, anthologies and magazines, and teaching throughout the Northwest—Rian has not traveled through life unscathed. Her recent poetry collection entitled Chord reflects on themes of survival in Rian’s role as a mother, a friend and as a witness to other’s suffering. Her poetry deals with “life taking its own course,” she says. “It’s about life creating a map separate from the map you thought you were navigating.”

Rian also facilitates writing with communities that have seen their fair share of tragedy. Five years after the war ended in Sierra Leone, Rian taught poetry to former boy-soldiers and young women forced into marriage and motherhood. Rian learned of a group of Sierra Leonean writers and professors who had met regularly during the war to share their writing and stories. “I was so moved by how they were talking about something as complex and devastating as war but continuing to talk about it and write poetry about it,” recalls Rian.

Upon returning to the U.S., Rian found a publisher for the anthology of Sierra Leonean poetry, Kalashnikov in the Sun (Pika Press), released in 2010 and the book is now found in every classroom in Sierra Leone.

“Whatever the subject is that I’m writing about, there’s always an undercurrent of memory and looking for the evidence of what remains from what is lost,” she says. “The sharing of stories is part of that.”

This year, Rian will use her Fellowship to work on a collection of non-fiction stories based on her own life called Life Expectancy, as well as curate an exhibition of images from the William Stafford archives in time for the Oregon poet’s 2014 centennial celebration.