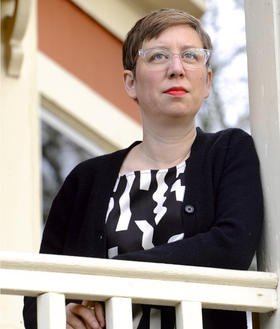 Laura Heit at her home in Portland.

In Laura Heit’s Two Ways Down, shadows and hand-drawn animations played across the walls in an installation that combined projection and almost lace-like intricate figurative cut-paper sculptures (human figures, towers, ladders, arches) on turntables, the projections and reflections bent by a clutch of cut glass forms. The result is that the viewer feels she is in inside of a film.

Heit says that the work “was initially inspired by Hieronymus Bosch's ‘Hell-scape’ in Garden of Heavenly Delights. These ghastly images brought to mind the recent weather reports - the increase in devastating wildfires, polar vortexes, landslides, typhoons, and violent floods.” She imagined visualizing the essence of fleeting daily experience, of the “unpredictability of nature, and the cyclical nature of life.”

Her current project in development uses animation photographed through a digital microscope overlayed with raw footage taken from the Apollo 12 mission and recent images of Pluto. These images come together to create a hypothetical star projected into a dark room, full of orbiting moons and unknown planets. Combining the micro and macro, Heit is thinking about “the outer reaches of our knowledge, and limits of our technology.” The work coincides with two new films completed in 2015 incorporating recent NASA footage.

Heit has received numerous awards including twice the Henson Foundation Seed Grant for New Work in Puppetry. And twice she has been invited for a MacDowell Residency. Her works have been screened widely, internationally and at major American festivals and institutions.  She has had solo screenings at Berkley Museum of Art Pacific Film Archives and REDCAT, among others, and solo exhibitions at Adams and Ollman, Zena Zezza and the Jordan Schnitzer Museum of Art. Her Animation Sketchbooks was published by Thames and Hudson and Chronicle Books in 2013. Heit received her BFA from The School of the Art Institute, Chicago and her MFA from the Royal College of Art in London. Heit is an assistant professor at Pacific Northwest College of Art.