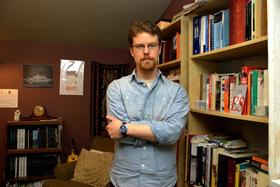 M. Allen Cunningham can trace his desire to be a writer to an inspiring high school English teacher and a fortuitous trip to Stratford-upon-Avon. “At that point,” he recalls of this pilgrimage to the birthplace of Shakespeare, “writing became very real to me, that actual human beings had, like, done this before. A person could devote oneself to something as amorphous and questionable as art, in particular, literary art.”

Over the course of four novels, numerous short fiction and non-fiction works and a poem or two, Cunningham remains fully fixed on expanding the interior lives of his characters. He does this using understated humor and a trained eye for noticing the telling details, such as a centenarian’s memory of his late wife:

“My sweet Avis, who helped wear the finish from the porch boards in all our coming and going—she was in little traces everywhere around me.”

“Each of my books deals with pressures put upon a character’s life,” says Cunningham. “I’m not generally interested in the big, massive in scope, sprawling social novel that draws a lot of ambition and interest in the literary world.”  Which is not to say that Cunningham’s work is slight, instead it spans the lives of characters from multiple eras and cultures, from a biography of poet Rainer Maria Rilke to his new novel, a retelling of the Hamlet story.

Award of the fellowship will allow Cunningham to continue work on a non-fiction book of what he describes as “marginalia and autobiography…a book of consolation and encouragement for other writers.”