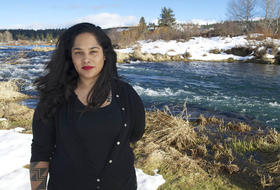 Photographs of Natalie Ball’s installation To Be Continued show a star quilt on a frame of branches with the letters M-O-D-O-C in lights in the center. There are handmade dolls, a stack of textiles, and notably, Ball’s daughter posing in front of this backdrop. Ball talks about the work as both a conscious action to disconnect her daughter from problematic images of Native women, but also to connect her daughter to “her history, her water, her land and her cultures for survival.” Ball’s consideration of her ancestry guides her work. She writes that she is “a descendent of African slaves, English soldiers, and a great-great-granddaughter of Kientpaush, also known as Captain Jack, who led Modoc resistance during the Modoc War of 1872.” She imagines her work as promoting a reorienting of conversations that shape Native American identities.

Circa Indian considered the women participants of the Modoc Ghost Dance ceremonies of the 1860s through the quilting practice introduced to her family as part of a Sioux-Modoc intertribal exchange in the 1960s. Mapping Coyote Black envisioned the artist as a female version of Coyote the trickster. Painted and deconstructed quilts, often of vintage fabrics, handmade dolls, branches and log cuts recur in Ball’s work.

Ball has shown widely on the West Coast as well as in Canada, Ireland, Hungary and New Zealand. Portland audiences have been able to see her works at Portland Art Museum and at Surplus Space as part of the One Flaming Arrow: Inter-Tribal Art, Music and Film Festival. She will show at Soil Gallery in Seattle in July.

Ball has received many awards including the MRG Foundation Lilla Jewel Fund Award and The Santo Foundation Award. Among the Oregon Arts Commission 2016 Fellows, Ball was selected to receive The Joan Shipley Award. Ball received a master's in Maori Visual Arts from Massey University, New Zealand, and a bachelor’s in Art and Ethnic Studies from the University of Oregon.