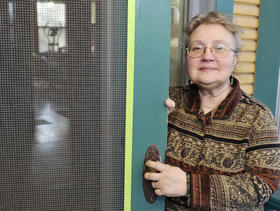 Ronna Neuenschwander’s current works of composite and mosaicked figures ask questions around the enduring human practice of crafting objects after our own form. What did these objects mean to those who crafted them hundreds of years ago? What function(s) did they perform? And what do they do today? Neuenschwander’s figures are both critical and humorous, making microcosm of melting pot, combining multiple ethnicities in a single figure, enhanced with ceramic shards from myriad sources.

Neuenschwander is a well-known Portland artist who has been actively working and showing in the Northwest since the late 70s and her work has been included in group exhibitions across the country. Her practice is clearly informed by her travel between the United States and Mali, Africa. Neuenschwander first went to West Africa in the 80s, studying architecture and the Taureg salt trade. She has made trips to Mali regularly ever since with her husband, artist Baba Wague Diakite, and children. Travelling back and forth between our affluent country and a country she notes is “labeled ‘one of the four poorest countries in the world,’” she says, “I see more clearly the riches and poverties of both places. Mythologies and politics of daily life in both homes become easier to translate into my vocabulary of imagery."

Neuenschwander is the Managing Director of Ko-Falen Cultural Center in Mali and Portland which she co-founded with Diakite. Ko-Falen is a non-profit international artist exchange which offers living and studio spaces for artists from other countries to study and collaborate with Malian artists.

Neuenschwander’s work is included in many collections including the Renwick Gallery of the Smithsonian, the Museum of Contemporary Craft and Portland Art Museum. She has completed a number of public art works, often in collaboration with Diakite at venues such as the Oregon Convention Center and the Oregon Zoo. Among other awards, Neuenschwander received the Bonnie Bronson Fellowship in 1994. She is represented by Froelick Gallery.