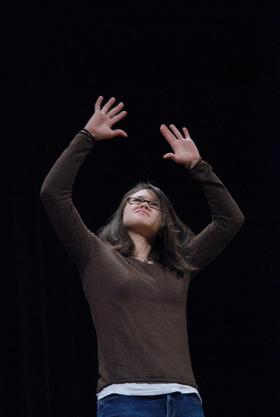 Deafness is not a sound barrier for Tiffany Hinano Hill, who recently won Oregon's Poetry Out Loud recitation contest. This contest, now in its fourth year, is usually dominated, as you can well imagine, by students who use their voices to recite poetry. But Hill, a junior at the Oregon School for the Deaf, put a new twist on the art of recitation and elevated the contest to a higher level by giving mesmerizing performances in sign language.

By participating in the contest, which took place at the Grand Theater in downtown Salem, Hill became first deaf person in the nation to compete at a state Poetry Out Loud championship. Yet the fact that she won the competition, besting 21 other teenagers from around the state, made this event even more remarkable.

Hill advanced through the first and second rounds after reciting "Ars Poetica" by Archibald MacLeish and "I wandered Lonely as a Cloud" by William Wordsworth. Hill came out on top after the third and final round, in which she gave a thoroughly engaging performance of Diane Wakoski's "Inside Out."

"I love Inside Out because the ideas in it are complex," said Hill through an interpreter. "I felt that I was able to see the poem, and I tried to take people on a visual tour of the images in it."

By winning the state Poetry Out Loud recitation contest, Hill received a $200 scholarship and $500 for her school's library. Now she will go on to represent Oregon at the national finals in Washington DC from April 26th through the 28th where she will compete for $35,000 in scholarships.

"I am really excited about competing in Washington DC," added Hill "I've never been to the East Coast, and this is going to be an incredible experience."

The Oregon Arts Commission has sponsored Oregon's Poetry Out Loud competition since its inception in 2006. Over the past two years, Deb Vaughn, OAC's arts education coordinator, has energetically promoted the contest to public and private high schools throughout the state. Participants memorized three poems from an approved anthology and honed their skills to win at their schools before coming to Salem.

Hill, a resident of Eugene, boards at the Oregon School of the Deaf, which is located in Salem. Jackie Lubbers, a junior at West Salem High School, was named the state's Poetry Out Loud runner-up. All of the contestants received a copy of "Deer Drink the Moon," an anthology of poems by poets who live in Oregon.