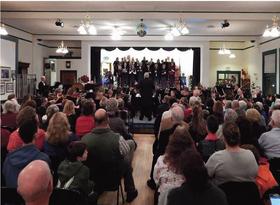 In a town of only 700 people, more than 100 Echo residents attended both concerts by the Inland Northwest Musicians in December. Attendance has increased so dramatically in the 16 years the group has been visiting that, though tickets are free, attendees must register in advance to attend. In fact, the two-day event has become a holiday festival, with local merchants hosting booths outside the community center.

Despite the enthusiastic reception the volunteer musicians receive in the rural communities they serve, it remains a constant challenge to offset travel expenses. In 2015, when the Inland Musicians became one of the first recipients of an Oregon Arts Commission Small Operating Grant, the ensemble’s future was uncertain.

“The $1,000 we received allowed us to continue to offer free concerts to our audiences,” says programs director Lori Johnson. “We continue to reach communities that rarely have access to fine arts.”

The Inland Northwest Musicians have performed more than 300 concerts in 50 different communities and 10 counties in Oregon and Washington during their 16-year history. The organization operates two orchestras, a chorale group and a symphony. The orchestra and the chorale are for more experienced musicians, with more than 40 members each, who rehearse in Pendleton. All four ensembles are led by R. Lee Friese.

In 2012, the musicians visited the Eastern Oregon Correctional Facility about 30 miles outside of Hermiston. Friese recounts how the whole ensemble was locked in the prison chapel with inmates and one correctional officer. “You can imagine the stresses and anxieties that people carried in with them,” says Friese. By the end of the hour-long performance, “these hardened individuals were on their feet whistling and shouting,” he says.

The Arts Commission’s Small Operating Grants provide operating support to organizations with an annual budget of less than $150,000 who have arts at the core of their mission and provide public access to ongoing arts programs for the local community.