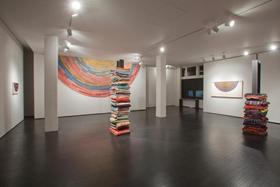 Blankets—wool, solid and plaid, banded in satin bindings or sewn edges—are the primary material artist Marie Watt employs in her sculptures and portraits. For years, she's pieced blankets together, embroidered over them, folded them, stacked them. Blankets envelop, protect, warm, invoke home.

A blanket may be a couple of yards of wool, but it's never just yardage because these are all blankets that have had other lives, that have been touched, worn.

Watt's Seneca heritage—Her father was from a line of Wyoming ranchers and her mother descended from the Turtle Clan of the Seneca Nation (Iroquois / Haudenosaunee)—greatly influenced the content and form of her work, emphasizing memory, storytelling, and a method of making that includes sewing together both in the studio and in the community.

A mid-career retrospective of her work, “Lodge,” was organized by the Hallie Ford Museum of Art at Willamette University in Salem, and traveled to the Tacoma Art Museum. There Watt's themes and strategies were embodied in portrait, sculpture, and installation. Watt is primarily a fiber artist although the folded wool blankets she uses may be cast in bronze as in her Almanac (Glacier Park, Granny Beebe, Satin Ledger) (2006) which was collected by the Portland Art Museum.

Almanac is a stack of blankets, but only a handful in the middle of the stack are actual wool blankets, the rest having been cast in bronze. This column, a familiar monumental form, appears again and again in Watt's work, but Watt subverts its masculine assertiveness with the soft blanket material. Yes, one can infer the trading blanket as a reference, but her use of blankets is just as much about story and ritual embodied in everyday objects.

Dwelling (2006), for example, is a column of 1,000 unfolded and stacked wool blankets donated by members of the community, each having a tag with a story of the blanket written by the community member who donated it to the project. A monument in Watt's hands is arresting in a quieter way.

Her enveloping structure, Forget-me-not: Mothers & Sons (2008), employed another repeating tactic, Watt's use of portraiture as storytelling tool to address the losses of war. Watt and assistants created small fabric portraits of sons lost in war. To these Watt added portraits of strong women, some mothers, some who embodied a broader sense of mother in a community.

If Dwelling, offers evidence of story as embedded in 1,000 blankets, her installation, Engine, explicitly makes space for storytelling. A felted wool cave, Engine featured projections of traditional stories told by prominent Native American storytellers. As much as works like these are about community storytelling, they are also very personal for Watt who recalls in writing about this piece her memories of “storytellers who I grew up listening to and learning from a kid attending title IX Indian Education Programs in the Pacific Northwest’s urban Indian Community.”

Among other accolades, Watt was awarded full fellowships to the Skowhegan School of Painting and Sculpture in 1995 and the Vermont Studio Center in 2000. This year the Oregon Arts Commission in partnership with The Ford Family Foundation provided the Hallie Ford Museum of Art, Willamette University, to acquire Watt's, Stadium: Jim Thorpe and Relations (Dwight Eisenhower, Pop Warner, George S. Patton, Michael Jordan, Babe Ruth, Sonny Sixkiller, and Animal Friends) (2008). Watt holds an MFA in Painting and Printmaking from the Yale School of Art (1996).

PDX Contemporary Art is currently presenting Watt's solo exhibition, “Skywalker/Skyscraper.” (Watt is represented in Portland by PDX Contemporary Art and in Seattle by Greg Kucera Gallery.) PDX Contemporary has devoted both its main space and its PDX Across the Hall space to this major solo show for Watt with patchwork arcs of wool blanket strips and signature stacks of folded blankets, one, Babel, seemingly pierced with a vertical steel I-beam.

So although Watt has is now living much of the year in Brooklyn, New York, her regional ties remain strong and her path, as one of the blankets in her many columns, continues to fold and unfold and refold again.