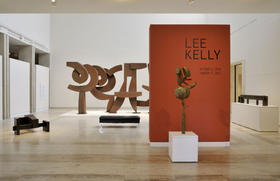 Silverton hosts the twin stainless-steel towers studded with dancing leaves of "Lupine Fugue," shining among the foliage or reflected in a nearby pool at The Oregon Garden. Bend welcomes visitors with the great rusted Cor-ten steel "Bend Gate," its circle sections perched on posts suggesting the architecture of dome and arch. And the centerpiece of Portland's International Rose Test Garden is a sculptural fountain named in memory of Frank L. Beach, its steel form bringing to mind ancient stone monuments and Japanese joinery.

Anywhere you go in Oregon, you'll see work by sculptor Lee Kelly, who for the past 50+ years has created large-scale sculptures at sites in cities all over the West. As Portland Art Museum chief curator Bruce Guenther notes, for a time in the '70s Kelly was the only artist winning public-art commissions on the West Coast. This period for Kelly began in 1972 with the magnificent "Gate F" at Candlestick Park in San Francisco and "Waterfall, Stele, and River" at the University of Houston and included the striking "Leland I," anchoring the series of Lawrence Halprin-designed plazas in South Portland. A recent map of his public works in Oregon published by the Portland Art Museum lists 31 sculptures from Vancouver to Eugene, and that's just a start. Kelly's works have been a mark of civic pride, landmarks contributing to a sense of place, becoming cultural touchstones of the urban landscape throughout the region.

At the same time, on the grounds of Leland Iron Works, a 1928 lumber mill Kelly has converted to a studio on acreage in Oregon City, he has created major sculptural works as time has allowed. One of these works welcomed visitors to the Portland Art Museum for the retrospective exhibition, Lee Kelly (funded in part by the Oregon Arts Commission). A showstopper, the monumental "Memory 99" (1999) was installed in the Schnitzer Court in the heart of the Museum. Its rusted towers, perched curls and horizontal strokes suggest the three-dimensional brushwork of a colossus. This is tons of steel with which Kelly somehow is able to create a sense of movement and agility at the same time as a weighty timelessness.

As public sculpture, Kelly's work is most usually in visual conversation with surrounding architecture, fauna, and other features of the landscape. And that's as it should be, but there's something special about being able to experience this work in a white walled setting, to be able to consider in isolation its curves, lines, to be able to focus solely on the work itself and the way its volumes work with one another.

Museum visitors arel already familiar with Kelly's "Arlie" (1978) which is permanently installed in the outdoor sculpture court. What many may not know is that this most creature-like of Kelly's monumental Cor-Ten sculptures of the '70s, a rounded form with a single circular "eye" perched on three angular legs, was named for the artist himself, Arlie being Lee's given name. The Lee Kelly exhibition introduces those familiar with his public works like "Untitled Fountain" which anchors the Tri-Met Transit Mall, to the unfolding of Kelly's work from early abstract expressionist paintings and studio-scale metal sculptures welded together of sections of sheet metal, through works that meld painting with sculpture, to later work like "Angkor I" (1994) in stainless steel with their surfaces gesturally and roughly finished.

Deeply connected to the land of the Northwest, Kelly was raised on a cattle ranch in Central Idaho. "Ranching," he says in a video made for the current exhibition, "had a profound effect on the way I saw things." Climbing and hiking throughout his life furthered his grounding in the landscape and as he says, "gave me confidence to take inspiration from elsewhere," meaning his many overseas ventures to sites of monument and temple in Mexico, Nepal, India, Burma, Chile and many more. In 1985, the Oregon Arts Commission awarded Kelly a fellowship to research the traditional bronze casting methods of the Newari of Nepal.

In Kelly's work (particularly in the '70s with his Cor-Ten steel pieces—surfaces that embrace rust the way cliffs with high iron content turn a rich orange-brown—and his use of minimalist Stonehenge-like slabs) there is a sense both of the land, of the earth from whence the steel was wrought and also of man's ancient drive to make work of scale to commemorate, to celebrate, to bear witness. At the same time, in the late '70s Kelly began working with stainless steel, considering surface, or the way light plays on surface, as much as volume. By grinding rhythmic and gestural patterns into the surfaces of works like "Angkor 1" or "Friendship Columns" (1990) at the north end of Waterfront Park on the west bank of the Willamette River in Portland (fittingly near the Steel Bridge), Kelly's still monumentally-scaled works play with reflection of color of their surroundings and ambient light in a way that is as airy as the works are weighty.

Kelly makes all of his work by cutting pieces of steel that he welds together in hollow volumes. He has come, he says, to consider his pieces as, "containers for ideas." As importantly, whether it be by simple sensitivity to human scale or overt features like a gateway or even as in the case of "Leaving Kathmandu," (2006) stairs, Kelly always offers viewers as he puts it, "a way in."