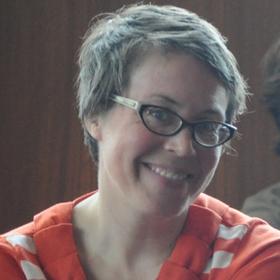 Try to invent a backstory for a composer whose works for choir have included setting Orestes to music as well as poems of Robert Duncan, William Stafford, and now Leslie Scalapino. Would you guess a background in classical music, a degree in composition, and maybe a minor in literature? Or coming out of chamber vocal music as a performer perhaps to write for the ensemble? No, try albums on the Kill Rock Stars, K Records, and Mr. Lady labels, teaching Women + Rock at PSU, and of course, the Ph.D. in comparative literature.

Sarah Dougher's path to a commission to set a suite of poems by the late Leslie Scalapino to music is anything but the expected. One way of understanding it is to look at it as a watershed rather than a straight path, with a number of opportunities, projects, and circumstances feeding into the present moment. Fate has had a lot to do with it—serendipitous commissions, the beginnings and growth of the Flash Choir, and well, life in general. In 2004, Dougher was diagnosed with cancer which gave her the opportunity to reflect on her art and her life. She seriously reevaluated the indie pop path she was on. “I decided I was done with both the indie pop style and that whole milieu, touring, everything,” Dougher says.

Not long after this major reevaluation, Dougher was commissioned to set Orestes to music. The Classical Greek Theater of Oregon was doing Euripedes' version with a focus on the struggle of the teenagers, and they wanted the music to rock. “I didn't know how to write music,” Dougher says, “so I taught the songs to these eight women by ear, by singing the parts to them.” That summer, she was asked by PICA to manage the recruitment of a horde of guitarists for John King's Extreme Guitar Orchestra which opened the 2006 TBA Festival in Pioneer Square. The next year, she was again asked to recruit volunteer performers for a large group performance for TBA. This was Rinde Eckert's On the Great Migration of Excellent Birds, and the group of performers she brought together and rehearsed would come to be called the Flash Choir. This performance required the choir members not only to sing, but to engage in coordinated and/or improvised movement so it self-selected for a certain kind of adventurous performer.

Once that performance was over, many members of the Flash Choir wanted to continue to work together. With musical director Pat Janowski, Dougher continued to work with the choir, writing a number of works for it, including the aforementioned Duncan and Stafford works, and more recently coordinating the choir as other artists like Ethan Rose have written work for the choir to perform.

Her latest commission is something different. Through a connection at her alma mater, Reed College, Dougher has been commissioned by the family of the late poet Leslie Scalapino to set suite of three of Scalapino's poem/plays into a work for five voices and acoustic instruments. She won't be working with the Flash Choir this time, but has been afforded a budget to hire and rehearse a group of professional musicians.

Scalapino (Reed '66) not only endowed three full scholarships at Reed, but left her art collection to the college as well. So Stephanie Snyder, who is the curator of the Cooley Gallery at Reed, arranged a memorial service for Scalapino for which she asked Dougher to create music. This led to Tom White, Scalapino's husband, to commission Fin de Siecle, a portion of which as a work in progress was performed at the memorial in February.

Dougher began by writing the poem out in longhand. “I start to physicalize it,” she says of her process. In the case of Scalapino's Fin de Siecle, Dougher has taken Scalapino's instructions as to how the works are to be spoken with the line breaks indicating pauses. “I want to take what was unfamiliar in her work, her syntax and [ambiguous] meaning and turn it into musical forms that sound familiar,” Dougher says of her overarching concept for the piece. These poems are what one might call difficult in form and content...they are not, that is, lovely little lyrics begging to be songs. They deal with hard topics in appropriately angular ways. “The content suggested the voicing, suggested the mood,” Dougher says. But ultimately she admits she writes for her own voice, and so the instrumentation as well as the choir is close to the human voice with violin, cello, trumpet, trombone, piano, and percussion. An Oregon Arts Commission grant will contribute to the recording of Fin de Siecle. The full work will premiere at the Portland Institute for Contemporary Art's (PICA) Time-Based Art Festival on September 14 and then tour to Mills College and Bard in New York, where Scalapino taught in the summer program.